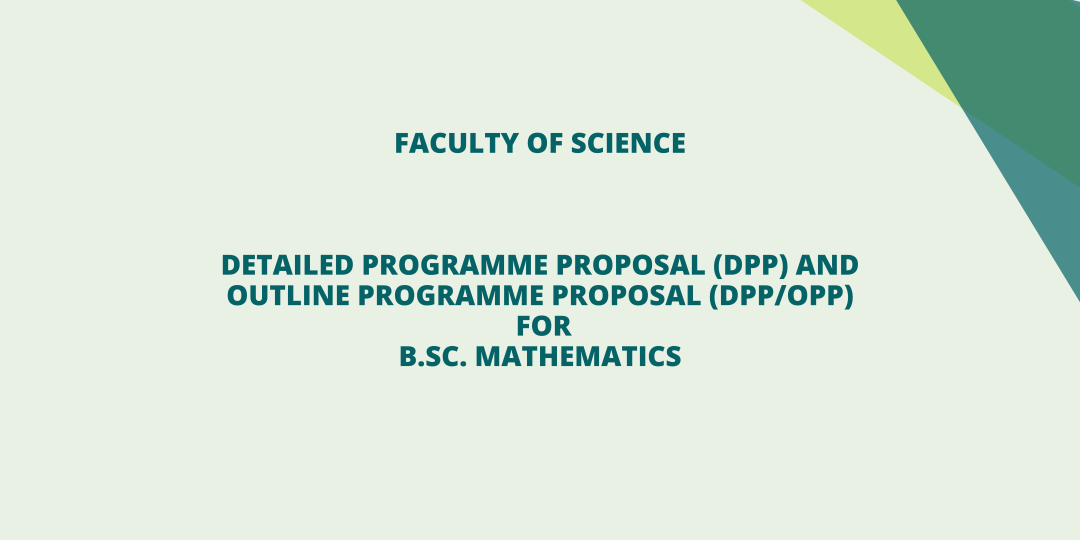 A BRIEF HISTORY OF THE Department

Mathematics Department is one of the pioneer units in the Faculty of Sciences that was established as a servicing unit at the inception of the University in 2004. The unit continued in its servicing capacity until the 2008 academic session when the full B.Sc. (Mathematics) programme took off.

The BSc. Mathematics programme is designed to equip the undergraduate students with the basic requirement for serving in a professional capacity in most areas of computation Mathematics as well as develop knowledge in theory of applied Mathematics. The degree programme would explore all the basic rudimentary or foundation knowledge of computing technology not known to most of students with the tools for computational techniques and thinking, as they would be exposed to the fundamentals of computing processes.

The BSc. Mathematics programme is aimed at taking you through the fundamental of the sciences of computation and the latest technologies that make the application of Mathematical Science an all-round catalyst in the design of any new market driven technological designs and devices without the constraints of face to face teaching.

To be admitted into the B.Sc. Mathematics programme, a candidate is expected to possess at least one of the following:

Evaluation: There are two aspects to the assessment of this programme. First, there are tutor marked assignments (TMA) which is 30% of the total course mark. At the end of the course, 100 - 200 level students would sit for Computer Based Test CBT (e-examination) and 300-400 level students would sit for written examination called Pen on Paper (POP) which has a value of 70% of the total course grade.

Structure of the Programme:

Subjects taught in the Unit are based on the ‘course system’ in which the subject areas are broken down into courses which are examinable. The courses are organized into levels (100-400 levels) in an order according to the academic progress.

The courses in the Unit are classified as follows:

B. SYNOPSES OF COURSES AND DETAILED PROGRAMME PROPOSAL (DPP)

Classification of living things, general reproduction and concept of inter-relationships of organism. Heredity and evolution. Elements of ecology (introduction) and habitats.

BIO192 GENERAL BIOLOGY LABORATORY II (1 UNIT) Observation and description of the morphological and diagnostic features as well as the differences among the different phyla of the plant, animal, archebacteria, eubacteria, fungi and protista kingdoms. Identification of the taxonomic hierarchy of the members of the above groups. Study of the structure and functions of their parts and habitats specifications

Hypothesis, theory and law with appropriate illustrations, Nature of matter – 3 states of matter, Atomic structure, electronic energy levels and orbital. Periodic classification of elements and its relationship to their electronic configurations, Chemical bonding, Survey of properties and trends in groups I, II, IV, VI and transition metal,

Practical based of CHM 101 and CHM 103: Cations and anions – identification, Acid- base titrations, Redox reactions and determinations

Practical based on general chemistry CHM 101 and introductory organic chemistry I CHM 102- Determination of melting and boiling points and reaction of functional groups.

GST101: USE OF ENGLISH AND COMMUNICATION SKILLS I (2 UNITS)

GST102: USE OF ENGLISH AND COMMUNICATION SKILLS II (2 UNITS)

Nature of science, scientific methods and theories; Law of nature,; History of science. Lost sciences of Africa, science, technology and inventions. Nature and scope of philosophy in science. Man, nature and his origin. Man, environment and resources. Great  Nigerian Scientists.

Getting started: How to use the book, why read about skills, getting yourself organised ; what is studying all about, reading and note taking; Introduction, reactions to reading, your reading strategy, memory, taking notes, conclusion.  Other ways of studying: Introduction, learning in groups, talks and lectures, learning from TV and radio broadcasts, other study media. Working with numbers; Getting to know numbers, describing the world, describing with the tables, describing  with diagrams and graphs; What is good writing? The Importance of writing, what does an essay look like, what is a good essay? Conclusion. How to write essays: Introduction, the craft of writing, the advantages of treating essay writing as a craft, making your essay flow, making a convincing case, the experience of writing.  Preparing for examination.

Function of a real variable, graphs, limits and idea of continuity. The derivative as limit of rate of change, Techniques of differentiation, Extreme curve sketching. Integration as an inverse of differentiation, Methods of integration, Definite integrals; Application to areas and volumes

General introduction to logic; clarity of thought; expression and arguments as basis for conclusion. Fundamentals of logic and critical thinking, types of discourse, nature of arguments; validity and soundness ; distinction between inductive and deductive inferences etc;  illustrations from familiar texts, including literature materials, novels, law reports and newspaper publications.

Complex Numbers:  The algebra and geometry of complex numbers; de’moivre’s theorem.  Elementary transcendental functions.  The nth root of unity and of a general complex number.

The notion of displacement, speed, velocity and acceleration of a particles.  Newton’s law of notions and applications to simple problems.  Work, power and energy.  Application of the principle of conservation of energy to notion of particles and those involving elastic string and springs.  Simple Harmonic motion.  Resultant of any number of forces acting on a particle.  Reduction of coplanar forces acting on a rigid body to a force and a couple.  Equilibrium of coplanar forces, parallel forces, couples Laws of friction.  Application of the principle of moments.  Moments of Inertia of simple bodies.

Integration:  The integral as the area of the ordinate set of a function.  Definition of the Riemann integral of bounded functions.  Conditions for integrality.  Properties of the integral.  Relations between integrals and derivatives.  Approximation to integrals by sum.

ATP + PA= -Q.  Controllability and observability.  Theorems on existence of solution of linear systems of differential operations with constant coefficient.

Individual or Group projects of approved topics related to the current research interests in the department.